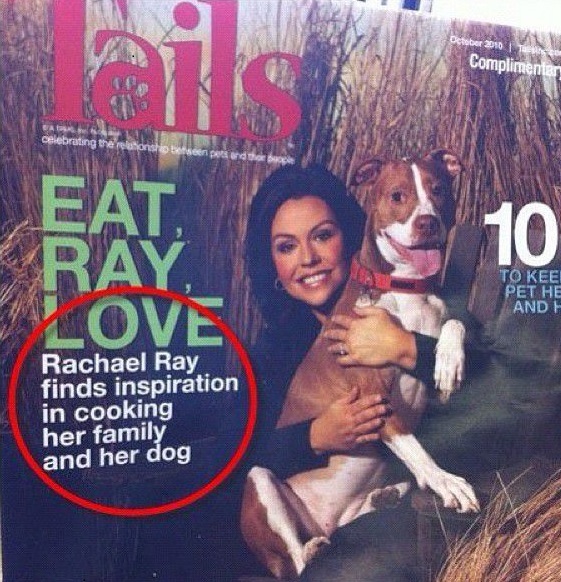 It's not the apostrophe, but the comma (,) can be quite confusing. The front cover of the magazine above would suggests that Rachel Ray is a cannibal who is inspired by cooking her family and her dog. The cover is fake, but illustrates the importance of using commas. Commas are probably confusing because of the different ways they are used:

The magazine cover illustrates a style rule: use commas to separate list items.

With examples, commas are used:

This book is dedicated to my parents, Ayn Rand and God.

This could be interpreted to mean that the author's parents are Ayn Rand (a philosopher and novelist) and God. This is not accurate, but the ambiguity introduced - though funny - can obscure the meaning of the sentence, To avoid ambiguity, the Oxford, or serial comma, can be used. This is simply a comma that is placed before the "and" that comes before the last item in a list.So you'd write

This book is dedicated to my parents, Ayn Rand, and God.

From the comma usage examples: above:

"The Irish flag is green, white and gold" with an Oxford comma becomes

"The Irish flag is green, white, and gold"  The Oxford comma does nothing in this instance.

The use of the Oxford comma is one of those things that people with too much time on their hands will fight over. . It does have a dedicated group of users who focus on amusing examples of ambiguity - such as appears above - that can be eliminated by using it. Most style guides will caution against its use, except to avoid ambiguity, thus, if your dedicating your book to your parents, Ayn Rand, and God use the Oxford comma, but when listing the colours of the Irish flag, no Oxford comma is required.

Of course, if you have written something that requires an Oxford comma to resolve ambiguity, perhaps you should consider rewriting it; why not dedicate your book to God, your parents and Ayn Rand instead?