In addition to the apps that you use, there are a lot of programs required to operate computer hardware.  These programs, collectively, are known as the operating system and have a number of functions: 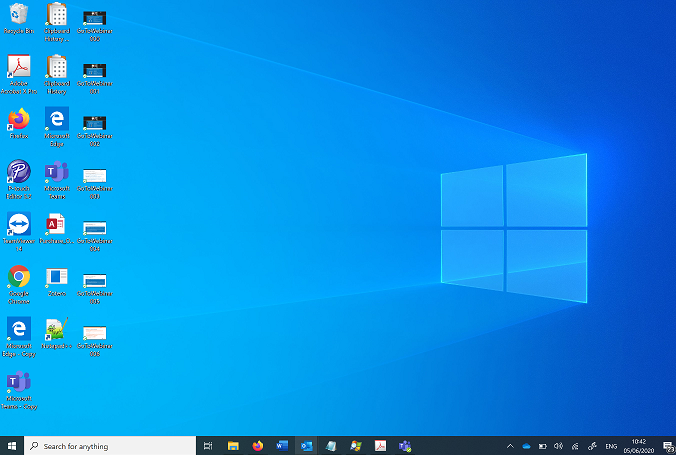 This screen is called a desktop.  We run apps or open files on the desktop by:

We use a mouse to navigate around the screen and click on items.

Windows, produced by Microsoft, is the most used operating system on computers throughout the world and comes preloaded on most desktop computers. A few versions of Windows have been developed, with Windows 10 the latest.  Windows comes with its own set of apps with which you can browse the Internet, check your email, listen to music, play games and much more besides.

MacOS is a series of operating systems created by Apple (makers of the iPad, iPhone and iPod).  MacOS is not nearly as common as Windows, accounting for around 10% of operating systems used around the world. Apple computers tend to be more expensive than those that use Windows, but many prefer their look and feel. MacOS comes with its own set of apps with which you can browse the Internet, check your email, listen to music, play games and more - just like Windows.

Linux is different in that it is open source, which means it can be freely used, modified and distributed by anyone. This is different from proprietary software like Windows or MacOS which can only be modified by Microsoft or Apple.  Some proprietary software can be free to use, but most of the time you must pay for it.  Linux is free to use and there are many different versions of it because people have chosen to modify it for a particular use or need. Despite this, only around 2% of operating systems used around the world are Linux-based, although Linux is often used on web servers, computers that store webpages and websites.

iOS is Apple's operating system for iPhones and iPads.  Siri is a virtual assistant that is part of iOS that will answer voice queries and allow the device to be operated by voice.

There are other mobile operating systems, but Android and iOS are used by most mobile devices.